This past weekend we 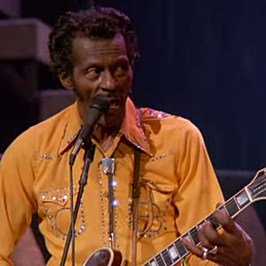 lost another great. Chuck Berry left the planet at the ripe old age of 90.  Berry was often credited with inventing rock and roll.  In fact, he and Little Richard battled for years over who was the true King of Rock and Roll.  I have to go with Chuck Berry, on this one.  Berry influenced most every guitarist and rock composer that came after him.  Rumor has it he was difficult to get along with and during a recording session he and Keith Richards allegedly got into a fist fight. That, I would've liked to have seen.  And then there was that dark spot on his career when he was busted for having a camera hidden in the ladies' room at a restaurant he owned down South.  At any rate, he was a true innovator in rock and roll music.  Thanks for everything, Chuck.