I find this sad news. Alec Baldwin's Donald Trump impression is nothing short of genius. I understand many Trump 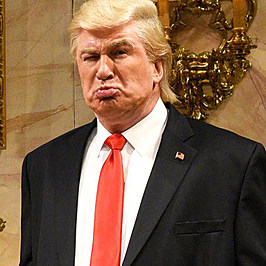 supporters don't appreciate it but we must remember that every president has been satirized on Saturday Night Live since the beginning. Trump gets very angry at SNL when they poke fun at him.  Love Trump or hate Trump, you have to admit that he is a piece of work, to say the least. Anyway, I hope the rumor isn't true because Baldwin's Trump routine is hilarious. If he does plan on dropping the bit, I hope he sticks to the deal he offered Trump. "Show your tax returns and I'll quit the impersonation.