We knew it was coming but that doesn't seem to soften the blow much.  Twin Cities comedy pioneer and legend Scott Hanson passed away over the weekend at the age of 66. Scott had been having some health issues.

Scott posted this on Facebook about a month ago 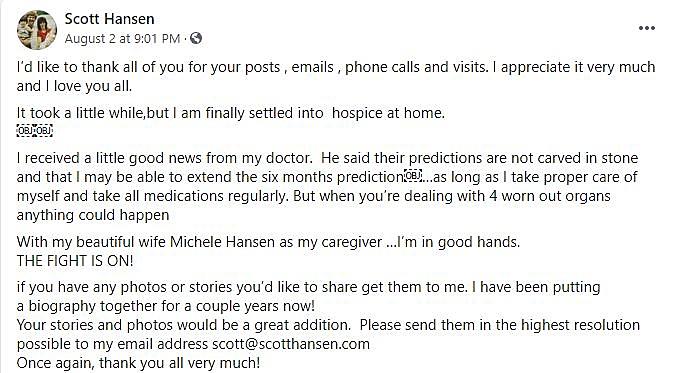 Get our free mobile app

This is sad for many reasons. If there is one thing the world can't afford to lose it's any "funny".  Twin Cities comedian, Scott Hansen is pretty much a comedy legend in the Twin Cities and his comedy has reached many thousands, maybe millions of comedy fans around the country.

Many comedians that are huge stars now appeared in Hanson's Twin Cities clubs back in the day. Comedians like Jay leno, Ellen DeGeneres, Jerry Seinfeld, etc.
The Twin Cities has turned out it's share of great comedians, Joel Hodgson creator of "Mystery Science Theater 3000", Al Franken, Louie Anderson, C Willi Myles, Mitch Hedberg and the list goes on.  With all this comedy talent to compete with, Scott Hansen managed to be named Minnesota Comedian of the Year not once but 5 times.

One of my favorite Scott Hansen lines was about growing up fat. "In high school girls flocked around me all the time. They didn't like me, they just couldn't escape my gravitational pull".

It's always been my opinion that comedians are vital to humanity. The gift of making people laugh is priceless.

Rest In Peace Scott, you made a difference!

This House For Sale in Duluth Looks Like The Flintstone's Home

Categories: Baxter's Morning Side Show, Comedy, Minnesota
Comments
Leave A Comment
How About A Pizza Party? This Central Minnesota Business Turning 40
Here Is The One Sign Minnesotans Didn’t Know They Have Been Waiting For
Minnesota Viking Surprises 8-Year-Old With Tickets To The Super Bowl
Colored Lights On Your Truck? Driving With Them On Could Be Illegal
Why 81 Year Old Man Will Not Stand Trial For 1974 Willmar Murder
Minnesota’s Favorite French Fries Surprised Me
Beautiful Halsey Is A Cool Puppy And Needs A Home & Family
SKOL! Are Minnesota Football Fans Considered Some Of The Best…or Worst?!
Would You Pay More Money For The Best Seats At A Minnesota Movie Theater?