July 2000, we at the Loon decided a great public service would be to provide free beer to our listeners.  We really only planned on doing this for a month but 6,240 cases of beer later, we are still going strong.  We like to think of it as doing a public service. 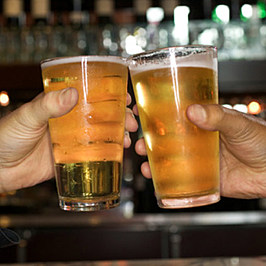 The stories that listeners have shared with us just warm our hearts.  Like the factory that would come to a complete halt when the belching loon sounder played on the radio. Workers would just stop whatever they were doing and try be the tenth caller to win the beer.  Or the bank teller who was fired for picking up her phone right in the middle of a transaction to try win the free beer.  And the police dispatcher who wasn't allowed to listen at work, so the cops on patrol would call in and alert her that the free beer sounder had just played.  There have been many stories over the years and Free Beer Friday shows no signs of slowing down.  So tune in Fridays and listen for the world famous belching loon every hour between 9 & 5, be caller ten and you are a Free Beer Friday winner.